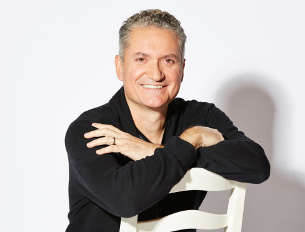 With a career spanning more than 30 years and a business that has covered the United States, Canada and beyond, Franco Mirabelli has distinguished himself as one of Canada’s strongest fashion talents.

After studying design at the prestigious Fashion Institute of Technology in New York City, Franco was tapped by the Anne Klein Company as a design assistant under the guidance of head designers Donna Karan and Louis Dell’Olio. Following several years of training, Franco returned to his hometown and launched the FRANCO MIRABELLI collection.

Mirabelli’s ready-to-wear collection has been designed and manufactured in Toronto, where he operated his own corporate boutiques, called MIRABELLI, for 30 plus years. Continuing demand landed the label in premier stores such as Saks Fifth Avenue and Nordstrom, and internationally in stores in Mexico, Dubai, Bermuda and Puerto Rico.

The Franco Mirabelli label has developed a reputation as a hip, sophisticated line. His designs have always reflected his Italian roots, with an emphasis on luxurious European fabrics and precise tailoring. His signature style has been described as elegant, modern and sexy.

The Mirabelli label has been lauded by Womenswear Daily and noted in publications such as Vogue and Ocean Drive.  Editorial coverage includes Elle Canada, Flare, Fashion, Where Toronto, Chatelaine, Canadian Living, The Globe & Mail, The National Post. He has been a regular contributor to  City-TV’s Cityline and Breakfast Television and on CTV’s Marilyn Denis Show. He also made regular appearances on City-TV’s Fashion TV with Jeanne Beker.

CORPORATE CLIENTS
His design talents were brought in to create original uniforms for the Four Seasons Centre for the Performing Arts, Canada’s first and only opera house, located in Toronto. Other corporate clients have included the Hazelton Hotel, the Intercontinental Hotel, and Magna Golf Club, Toronto.
RECOGNITION
The City of Toronto recognized his accomplishments with both an Industry Achievement Award for Excellence in Fashion Design, and a Designer of the Year Award. He was also presented with the Arts and Culture Award from the Italian Chamber of Commerce in Toronto, and his personal style has been recognized with a Man of Style Award. The Fashion Group International of Toronto has also honoured his achievements with a tribute evening called the Night of Stars.
COMMUNITY
He is a strong believer in giving back and has a long history of supporting numerous charities. His fund-raising efforts have included such events as the Celebration of Hope Fashion Show for the Markham Stouffville Hospital, Windfall Clothing, the National Ballet School, the Children’s Miracle Network, the Hospital for Sick Kids, CANFAR, Red Cross International, the Teddy Bear Affair for the Children’s Aid Foundation, the United Way, FACE, Fashion Cares, the Ontario March of Dimes and the Canadian Cancer Society.